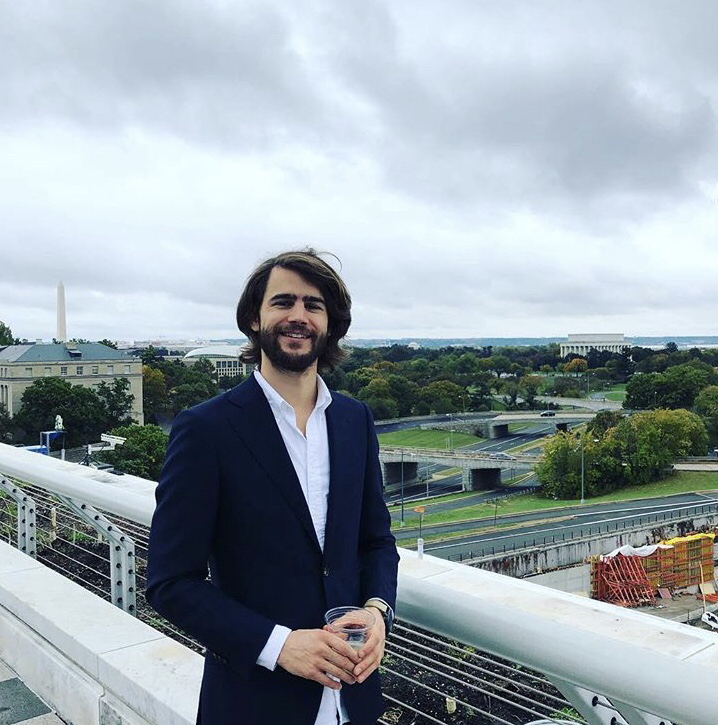 Matt, well to start, people might see your name is Matt but everyone refers to you as Wojo– can you tell me in 1-2 sentences about that nickname and how long people have been referring to you as Wojo?

People call me Wojo because my last name [Wojtkun] is complicated. It’s hard to pronounce and spell. So, for simplicity’s sake, people started calling me Wojo back in high school. When I got into college it stuck because my group of friends had a “Too many Matts” problem, so it’s Wojo.

That makes a lot of sense. So Wojo, you’re a Frontend Developer at Hatch, but you started in the world of political communications- can you tell me about your journey?

Yeah! Prior to Hatch I spent about a decade in the Communications field. I worked for an international non-profit doing communications work, and I worked at the FDA as a Public Affairs specialist, and then I worked at a large PR firm. I also worked as a Communications Director on a political campaign, and eventually worked on the Hill as a Press Secretary for two years. With Communications, I kind of just fell into it it– it was what I studied in college. I’ve always been good at communicating, and understanding how to communicate an organization’s vision. In my opinion, being able to do that is just as important as the vision or idea itself.

And then, what landed you where you are now in tech?

I switched around jobs quite often– every 1.5 to 2 years I was working somewhere new. It wasn’t the companies themselves, but rather, the day to day of the communications work that I wanted to change. There was a time when I had to think: what else could I want to do with myself?

When I was in high school, I learned German and it ended up being one of my majors in undergrad– I’ve always liked the idea of being able to communicate in a completely different language. To be able to express yourself using wildly different words than you typically do is so fascinating to me. I’ve also always enjoyed building things– and tech has gotten us to the point where you can really build stuff.

So, I kind of leaned on my interest in learning new languages and decided to try out code. I was able to learn quite a bit on my own.

I would basically learn in my free time. For example, I’d get up at 6AM and dive into it. But around 8:00/8:15AM (when I would typically need to leave the house for work), I would get frustrated because I just didn’t want to stop learning! That’s when I knew this was something I was seriously into, and then eventually I did a coding bootcamp in summer of 2017.

How long were you learning on your own for?

I was self-teaching for about a year and a half.

What tools were you using to teach yourself how to code?

I was using any free tools, things like Code Academy, Stack Overflow; I was reading a ton of Medium articles with free tutorials: Scotch.io, Free Code Camp. They all have really good tutorials. Eventually I decided to pay for a couple of courses on Coursera, and did a couple of month long programs that got me more interested. Even after all my online courses, I had a ton of questions and ended up deciding that I would benefit from day-to-day immersion where I could learn all day and have someone there to look over my shoulder and answer questions.

Have you always had a knack for tech?

It has always interested me. I wouldn’t have considered myself a “tech expert” growing up, but I did always really like playing video games, and still do (much to my wife’s dismay). When I was younger, I liked to study how things worked, not just tech. I remember looking through David Macaulay’s book “The Way Things Work” for hours. Most recently, I got interested in billiards. I don’t mean just going to the bar and playing around, but learning stoke mechanics and game strategy. It’s like golf: there are so many variables to process before taking shot. Plus, it’s “systems thinking” that I have always been interested in – understanding how all the pieces fit into a broader picture, like an ecosystem.

What made Hatch, and the world of tech in general, feel like a natural fit, was the fact that you are never done learning how to code. Every 3 or 4 months you’re going to have to learn something new because that’s how you’re going to thrive at this position.

What is your day to day like at Hatch Apps?

Every day, I’m building. What I mean by that is I will receive design from our product designer, Ramzi, and I’ll sit down with him and whoever else has a hand in the project, and ask a lot of questions about the functionality and how we want things to appear to users. The first day a product design is introduced is more of a planning period, so on those days I will plan how I’m going to approach the project. Then, I’ll basically go out and build it. At the end of the day it’s just one big problem I’m trying to solve, and you have to break things down into smaller, more-readily-solvable problems to ensure a smoother build. At the core– in my day to day I’m writing code and building projects using HTML, CSS and various Javascript libraries. I love it.

How did you find Hatch?

A lot of the coding bootcamps try to bring your cohorts to area companies, and meet with development teams. This is so that they have networking opportunities where you get to hear from developers who get to talk to the cohort. I bumped into Hatch Apps with my New York Code and Design Academy (NYCDA) cohort. We did a visit to Hatch Apps’ offices, and the company sounded really cool. Right at the end of the meeting they said they had an opening for a junior web developer position, so I jumped on it– and here I am.

What do you like to do outside of Hatch Apps?

Hanging out with my wife, that’s always the best thing. But I also play a lot of pool. I’m probably at the billiards hall 2-4 times a week. Besides those, I still enjoy reading about policy and politics; that was my career for more than a decade. Plus, I think it’s important to keep up on the issues of the day and be informed when it comes time to elect our leaders – at all levels of government (local, state, and federal). Elections matter. Go vote!

Why do you think Hatch Apps is important?

The reason why I really love Hatch is because I think we’re building a product that has big implications for a lot of people, and I don’t just mean for big companies. Eventually, we’re trying to build a model so that no idea is held back by technical issues or reasons. It shouldn’t matter what your socioeconomic status is, or whether you understand the the technologies themselves: if you have an idea you should be able to build an app- and I think Hatch is trying to make that happen. It’s a powerful vision and I’m happy to be a part of building it.